You might have missed, late last year, the details of British Airways’ plans to squeeze those of us who fly long haul from London’s Gatwick airport even further into our seats.  From July 8th, 2018 British Airways is joining the airlines that have crowbarred another economy class seat into some of their 777s. Routes this will affect include New York, Kingston Jamaica, (except Friday for some reason) and Orlando.   As you can see from the image, their rationale is that they’re wanting to compete with the low cost carriers (LCC’s) at  Gatwick.  There’s three problems here.  Firstly BA (who traded for years off their “The Worlds’s favourite airline” moniker) seems to be responding to LCCs by joining the race to the bottom instead of providing the levels of comfort and service that a quality carrier should.    The second is related, and it’s that BA themselves now appear to think they’re competing with the LCCs and not quality airlines.  This can’t be good for larger customers in the long term. Thirdly there will be no additional toilets – the number of passengers per loo going from 25 to 30. Lord help us. 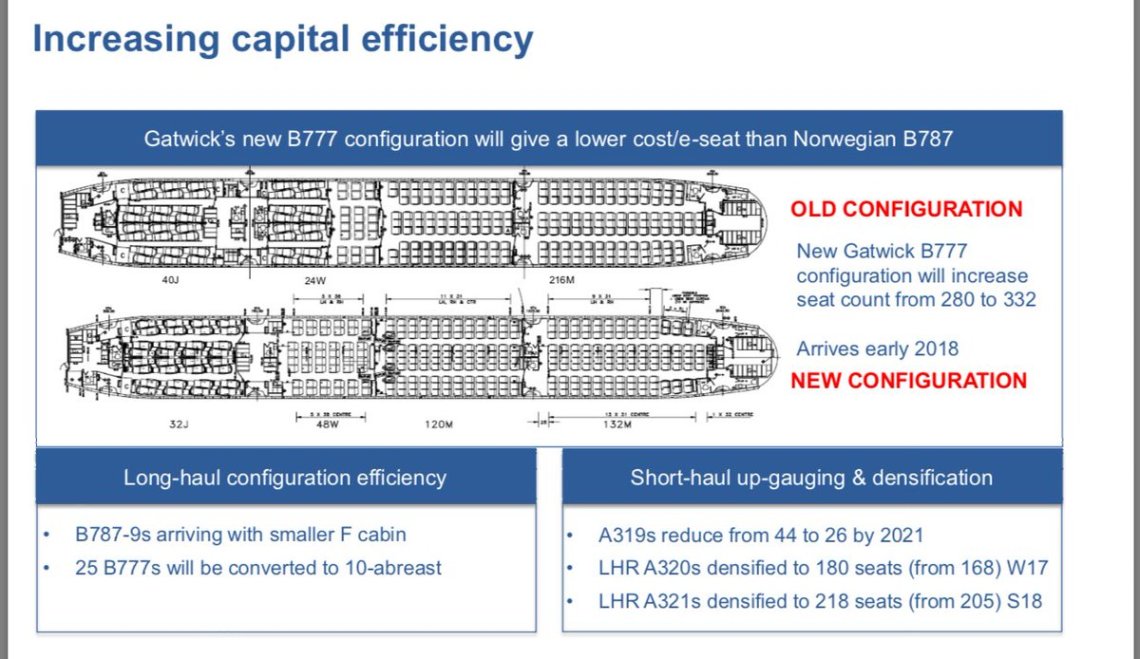 Worryingly, the ratio of new 777 aircraft being delivered with 10-abreast seating is now around 50% – when the aircraft was first delivered, it was more like 5%.    To be fair, a few airlines account for a lot of those tighter cabins, but it’s still a worrying trend.

Another concern here is the box in the right hand corner.  BA appear to be trying to match an EasyJet seat density on their smaller European fleet.  I’ll write more about that when the time comes, but it’s relatively tight for us larger people in that cabin even now.

For those looking for choice, here’s a brief rundown of who flies 777s in which configuration, with thanks to the excellent Airline Reporter.

^ Changing on LGW Longhaul from next year